Deep Ecology is an ecological and environmental philosophy that promotes the inherent worth of all living beings, regardless of their instrumental utility to human needs. It stands in direct contrast to the dominant, anthropocentric worldview which has its origin in the agricultural mindset that emerged at the dawn of civilization 8,000 years ago. Since the current paradigm clearly doesn’t work in the long term and in the wider ecological context (think about Climate Breakdown and the Sixth Mass Extinction Event, caused by “civilized” humans trough deforestation, habitat destruction, topsoil erosion, mining, industry, pollution, etc.), a radical re-structuring of modern human societies is needed to cope with the changes we’ve already inflicted on our environment. This restructuring should to happen in accordance with Deep Ecology’s conclusions, namely to rewild communities to place them back into their ecological context – drawing inspiration from indigenous communities all over the world.  The insights of Deep Ecology are by no means new! Primitive people have known all this since the beginning of time (if you ask them) or since at least a few hundred thousand years, if not longer (if you ask an anthropologist). Aboriginal cultures all over the world have not forgotten where their place in the cosmos is, they see the bigger picture clearer than most scholars and thinkers today, and they still live within their unique ecological context to this very day (at least at the fringes, where civilization hasn’t wiped them out yet).

Deep ecology argues that the natural world is a subtle balance of complex inter-relationships in which the existence of organisms is dependent on the existence of others within ecosystems. Human interference with or destruction of the natural world poses a threat therefore not only to humans but to all organisms constituting the natural community. The most obvious example is deforestation – the holocaust waged against living, thriving forest communities, that causes streams to dry up and living soil to be carried into the ocean, that stops rain clouds from forming, and that kills billions of living creatures as well as the entire landscapes they inhabit. Once you reach a certain threshold, a ‘Tipping Point’, ecosystems tend to rapidly switch from a complex to a more simple state, losing most of their biodiversity and resilience in the process. We are about to witness this in the Amazon, where rampant deforestation will very soon cause the turnover from moist rainforest to semi-arid savanna. We have witnessed it with underwater forests – coral reefs – around the world.

Deep ecology’s core principle is the belief that the living environment as a whole should be respected and regarded as having moral and legal rights to live and flourish. “Bees as pollinators” is a popular example where the main concern usually lays in how we humans will get enough food to continue doing what we do (namely destroying the environment), so engineers and capitalists come up with “solutions” like building robot bees or using wage-slaves to manually pollinate fruit trees. Of course, the loss of the most efficient pollinators would not only affect humans (and, obviously, plants) but most other mammals, directly or indirectly, as well as many reptiles and insects.  Other living beings are more than just “resources”, they are friends and foes, colleagues and competitors; but most importantly, they are relatives, they are kin. Again, indigenous people have known this all along. We have all been born to the same Great Mother, and we are all her children. We all contain the same minerals and elements that have been cycled and recycled since the beginning of time. She loves none more than the other: the tiniest ant no less than the blue whale and the lichen no less than the redwood tree; and she provides all her children with everything we need.

What makes Deep Ecology “deep” is that it looks more deeply into the actual reality of humanity’s relationship with the natural world and includes feelings, emotions and spirituality, and therefore arrives at philosophically more profound (“deep”) conclusions about ecology itself than the prevailing, reductionist ecology – which is merely a cold and “rational” science, a branch of biology. 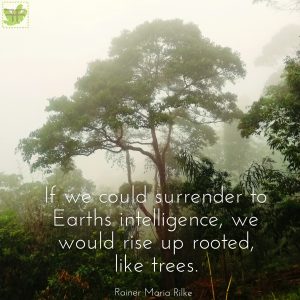 Deep Ecology is the opposite of the anthropocentric environmentalism (which is concerned with conservation of the environment only for exploitation by and for human purposes) perpetuated by the UN, David Attenborough, Greenpeace and WWF, since deep ecology is grounded in a radically different set of philosophical assumptions.

Deep ecology takes a more holistic view of the world human beings live in and seeks to apply to life the understanding that the separate parts of the ecosystem (including humans) function as a whole – much like James Lovelock’s Gaia Hypothesis. It provides an ideal foundation for the environmental, ecology, neo-animist, eco-radical, green anarchist, and anarcho-primitivist movements and has fostered and encouraged a new system of environmental ethics, views, and ideas advocating wilderness preservation, human population control, simple living, rewilding, and rediscovering spirituality and connectedness.

The most beautiful tree in the area

They are probably the most altruistic beings, they give a lot and take little. They give us oxygen to breathe, filter water for us to drink, gift us with their fruit, leaves, trunks, branches and roots. They live for hundreds, sometimes thousands of years, and often withstand events that would be intolerable to other species, such as severe droughts or wildfires.

Climbing is one of the best (if not THE best) all-round workouts and makes you strong and flexible. People who climb often have a deep passionate connection for Nature, in fact this is one of the reasons you often hear when you ask why people like climbing. It makes you feel connected to Nature, and if you climb a tree it makes you feel connected to the tree. If you are harvesting fruit, the deep joy of the harvest might make you feel thankful for the gifts that this tree is giving you and the wonders that took place to allow this – the tree makes delicious fruit from nothing but earth, air and sunlight, and the bees and earthworms and bugs all helped.
While climbing it may happen that the tree even communicates with you: if you listen carefully and pay attention, most trees warn you before a branch is going to break under your weight: like a person that carries a heavy load the tree groans/creeks to show you he can’t hold you much longer.

Paul Shepard wrote in his book “Coming Home to the Pleistocene” that we humans, as former primate climbers, may still be “subject psychologically to instinctive arborphilia, in which safety and all good things are up.” 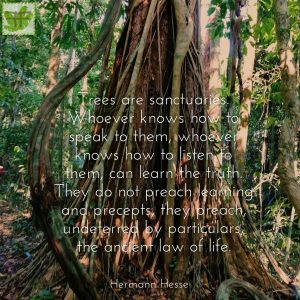 More and more data suggests that plants have indeed a form of intelligence, can communicate (for example over an internet-like network of fungi) and even have certain character traits. Mother trees recognize and nurture their own offspring, and often there are egalitarian strategies applied in inter- and intraspecific plant-to-plant relationships – which stands in contrast to the traditional notion that trees only compete against each other for light, nutrients, water, etc. (also called ‘survival of the fittest‘).

Ecosexuality is a term characterized by the authors of the book “Ecosexuality – When Nature Inspires the Arts of Love“. For us it basically means falling in love with the Earth – as opposed to seeing the Earth as a lifeless object, to be exploited for human use. The anthropocentric worldview is the enemy of ecosexuality, since it sees only humans as main protagonists of the universe and the world as merely a playground that can be manipulated to fit ones desires.
Even if you acknowledge – not appreciate, acknowledge – Nature for giving us air to breathe and water to drink, this is not enough.
Charles Eisenstein writes:

The lover does not say, “I care about you because without you, who would do my laundry?” Love is for who the beloved is, in and of themselves. To have a beloved then, one must see their “is-ness.” Our ideology has blinded us to the beingness of the planet and to most of what lives in it and on it. To love Earth, we must see it as a subject not an object. Objectification of women, some say, is a key prerequisite for rape. The same must be true of the planet.